Welcome back to Great Worm!

This site is under construction, but I thought I would put a new version up and running right now in order to get the ball rolling to show all the new zines I'm carrying. 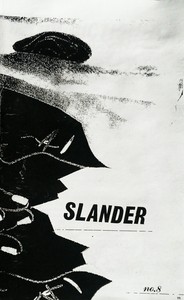 Description: This is Mimi Nguyen's first zine since publishing the hugely influential and disseminated Race Riot 2 compilation in 2002. Since then, she completed her PhD, a post-doctoral degree, obtained tenure and was promoted to assitant-professor. Yet she remained connected to the underground scene: "Maybe I didn't know if I could 'write that way' anymore. But here it is--a zine about being an old lady punk in the academy, whp rediscovers her zines or misrecognizes her younger self in the studies that her colleagues pursue [...] I thought being in the academy would mark a break of some sort with this past, but instead [...] it is a reminder of what it means to continue to live after punk made me who I am (with its violence, its appetite) but with some of those wild things that once rules my teenage heart having not ended. It is the duration of something that claims me still." She follows up with her thoughts on the academic studies of punk: they mostly seem to fall far short of reality, especially when it comes to whitewashing the culture. In two essays, Mimi discusses how the place of women of colour in the Riot Grrl movement is mostly viewed through their relationship to white women, as opposed to their contributions on their own. She reprints Golnar Nikpour's review/critique of the collection, White Riot: Punk and the Politics of Race, the latter which somehow manages to erase huge swathes of people of colour's punk history. The last two essays are on the lighter side of things. In "Your Daughter is One", Mimi writes about Times Square, a 1980 movie which "captures so much of the romance I had with punk", and in "Punks 1, Reason 0," she goes over the spontaneous and long-prepared reactions to Reagan's death, and his defining relationship to American punk. 52 pages. 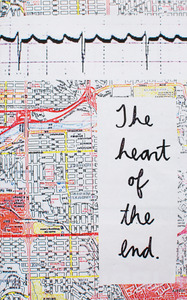 The Heart of the End

Description: The Heart of the End is Sonia's journal of reacquaintance with Calgary, returning after having left her hometown for a decade. Full of foreboding, she decided to dive into Alberta and Calgary's history, both from her settler's, and First Nations' perspectives, finding that there is still a thriving anarchist and queer underground. Her return to tar sands territory coincided with 2012's hype about the supposed prediction of the end of the world by the Mayan calendar, and Occupy Calgary. This all leads Sonia to introduce the zine this way: Calgary calls itself "the heart of the New West." If fossil fuel consumption continues to produce greenhouse gases, which contribute to major climate change and all the associated measurable and immeasurable consequences leading to the end of the world as we know it... and if oil is the life blood of this system, and oil corporations are the heart muscle that keeps it pumping, and the oil corporations are based in this city, we call Calgary "the heart of the end of the world". Calgary is a place of change, indigenous communities, immigration, colonization, natural landscape, urban activity and radical responses to power and inequality. If Calgary is the heart of the end, then it's also the heart of the beginning. 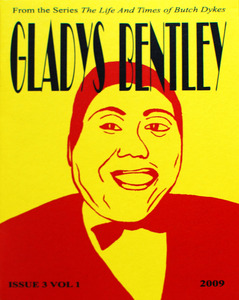 Description: This is a great portrait of Gladys Bentley, a black lesbian singer and performer who was celebrated during the Harlem Renaissance and World War II. We get a glance at her exhuberant performing style, her clandestine gay marriage, with some queer musical history during those eras thrown in, until her fall from queer grace. 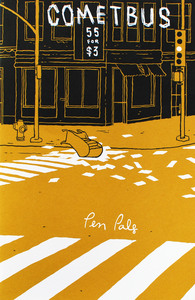 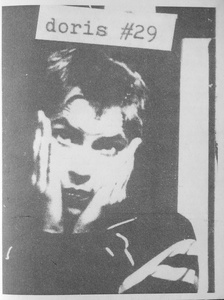